6 Inspirational Sights at the 9/11 Memorial and Museum 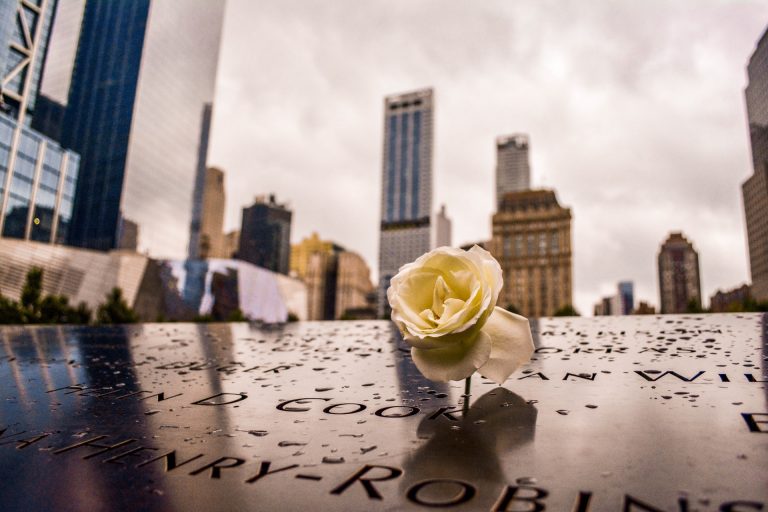 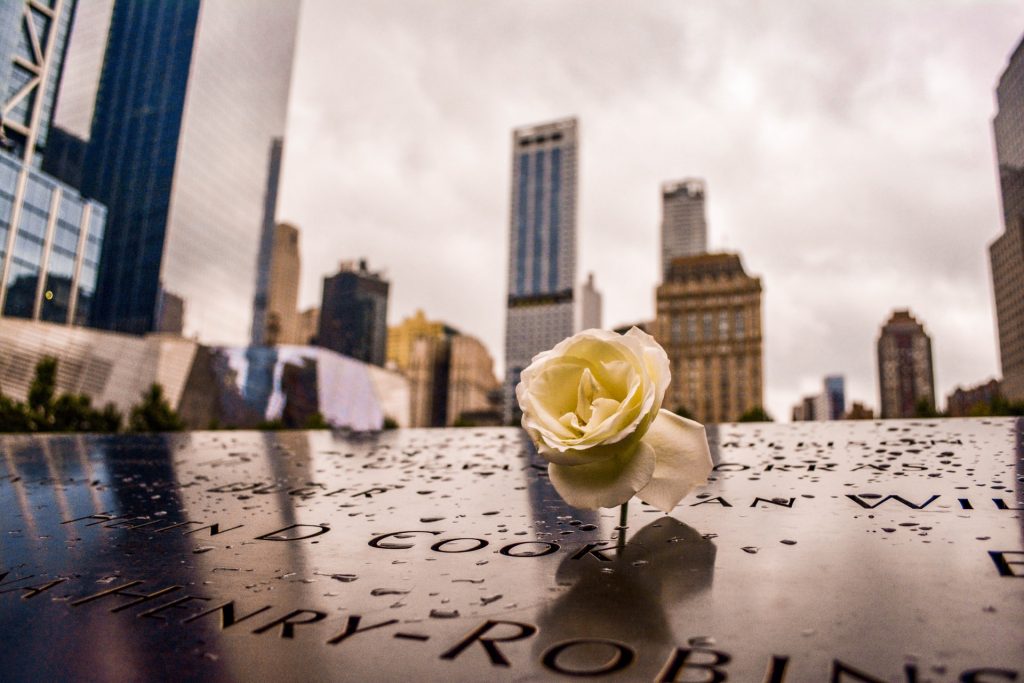 A beautiful plaza rebuilt at the site of tragedy, the National September 11 Memorial & Museum is a must when you visit NYC. You won’t find the bright lights of Times Square or the incredible views at Liberty Island here, but this area is very much a part of the story of New York.

While the space commemorates a time of tragedy in New York’s — and America’s — history, there are a number of places at both the 9/11 Memorial and the nearby 9/11 Museum that manage to add a glimmer of hope and heroism.

Here are a few of the most inspirational sights we love at the 9/11 Memorial and Museum and what makes each one special. 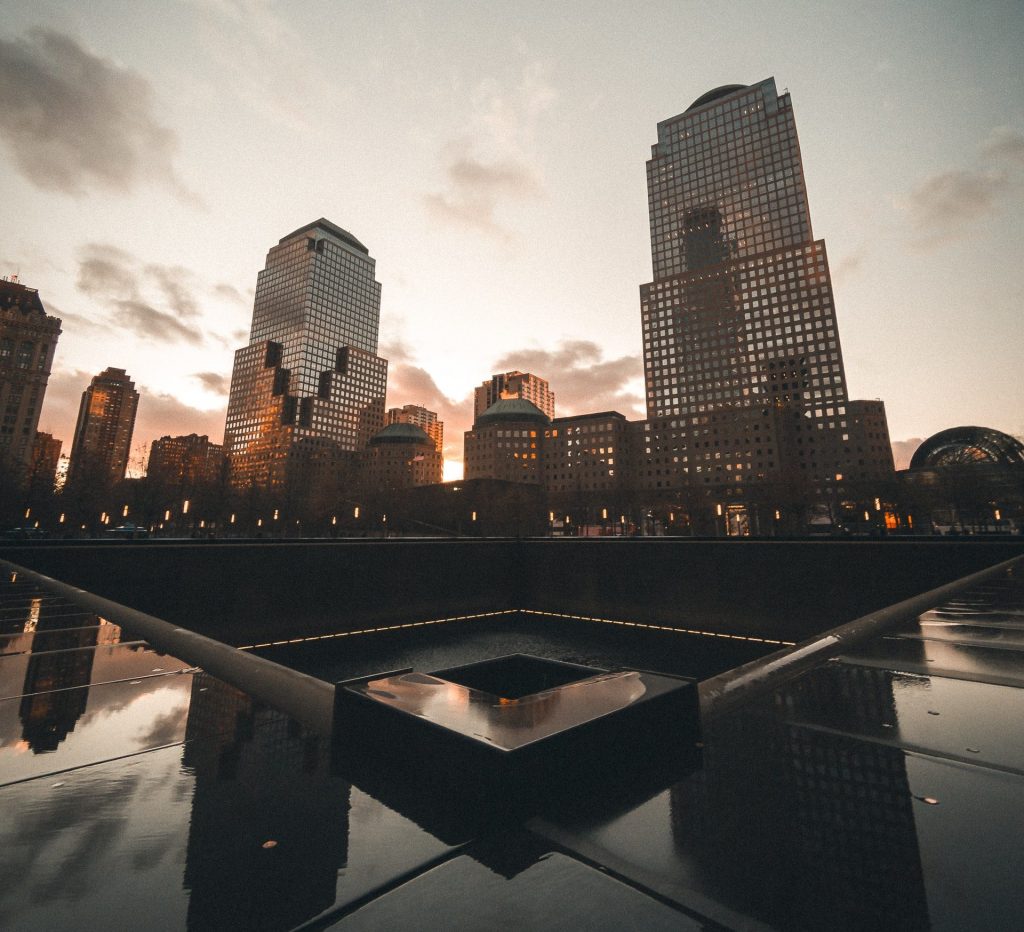 Dedicated on the 10th anniversary of the attacks — September 11, 2011 — the 9/11 Memorial is free for anyone to visit during their open hours. The memorial’s most well-known features are undoubtedly the Memorial Pools.

What makes it inspirational: These twin pools are located at the site of former World Trade Center buildings, the famous Twin Towers destroyed in the 9/11 attacks. Each is almost an acre in size, located in the footprint of the missing towers. In the center of each square pool, you see water pouring into the earth, an art piece aptly named “Reflecting Absence.”

Around the edges of both pools are bronze panels inscribed with the names of 2,983 people, which include the 2,977 victims of the 9/11 attacks and six people killed in the 1993 World Trade Center bombing.

On a given day, you’ll see flowers placed on some of the names, as many who come to the memorial come to pay tribute to their lost loved ones. 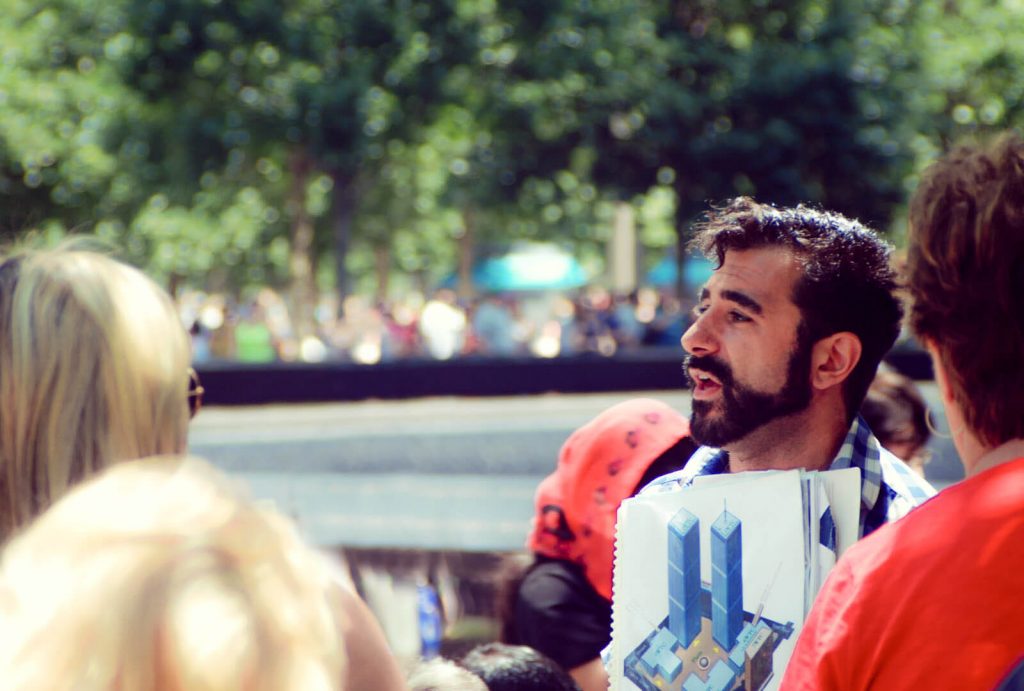 A New York tour guide explains the significance of the memorial pools.

The pools in themselves are impressive. They’re the largest man-made waterfalls in the country. Water flows 29 feet down into the basin, requiring 18,000 gallons of water every minute.

From one end of the plaza, you can view the pool with the new One World Trade Center, home to the famous One World Observatory, in the background.

There are hundreds of swamp white oak trees at the Memorial Plaza, each one a symbol of hope and renewal. But among the oak trees, one tree stands out: a callery pear tree.

This tree is called the Survivor Tree for good reason. The tree was recovered from among the rubble of the World Trade Center, badly burned and with only one living branch remaining. The tree was replanted, but no one really expected it to survive.

However, the next spring, the tree bounced back, showing signs of new growth. It flourished even more after being replanted at the Memorial Plaza. Now, this pear tree has become a symbol of hope and rebirth. Each year, the 9/11 Memorial gives the seedling of this survivor tree to three communities who had also endured a recent tragedy, spreading strength and hope.

Moving indoors, the 9/11 Museum, opened in 2014, houses a wealth of artifacts that help tell the story of 9/11 and its aftermath. Among the many displays, the In Memoriam exhibition stands out as particularly moving.

What makes it inspirational: This exhibit features a floor-to-ceiling collage of photographs of the 2,977 victims of the 9/11 attacks (including the attacks at the Pentagon and Pennsylvania) as well as the six victims in the 1993 bombing. The sheer scale, the individualism of each photo, and yet the knowledge that one is forgotten is powerful.

There’s also an inner chamber where profiles of the victims are projected on the wall along with memories from their loved ones. Personal artifacts belonging to the victims give visitors a glimpse into the lives of these individuals.

This exhibition is personal and can be difficult to walk through, but it’s worth experiencing, and even families can appreciate the inherent beauty of this space, framed with so many photos and mementos. 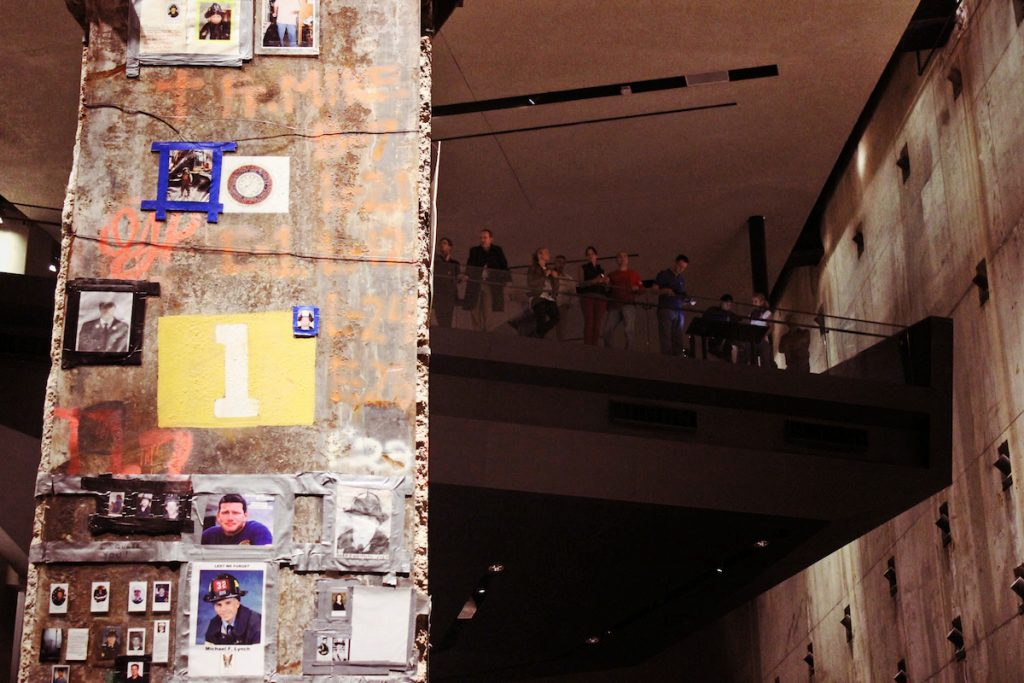 The Last Column, which sits in the center of the September 11 Museum’s Foundation Hall, is literally the last beam taken from Ground Zero. The column was part of the World Trade Center’s South Tower.

The beam was removed from the site in a ceremony on May 30, 2002, to mark the end of the recovery effort. For a time, it was housed in a hangar at the John F. Kennedy International Airport before finally taking its place at the 9/11 Museum.

Since the column rises 3.5 stories, designers had to build the museum around it — it would’ve been too large to transport inside.

What makes it inspirational: The history of this artifact makes is particularly compelling. The story goes back to a firefighter who had marked the beam at Ground Zero to indicate the spot where his team had located traces of men from their unit who were missing. But today, the beam has been reborn as a way to remember those who were lost. Its surface is marked with dozens of tributes from workers and family members of the victims, a tapestry of love and friendship. 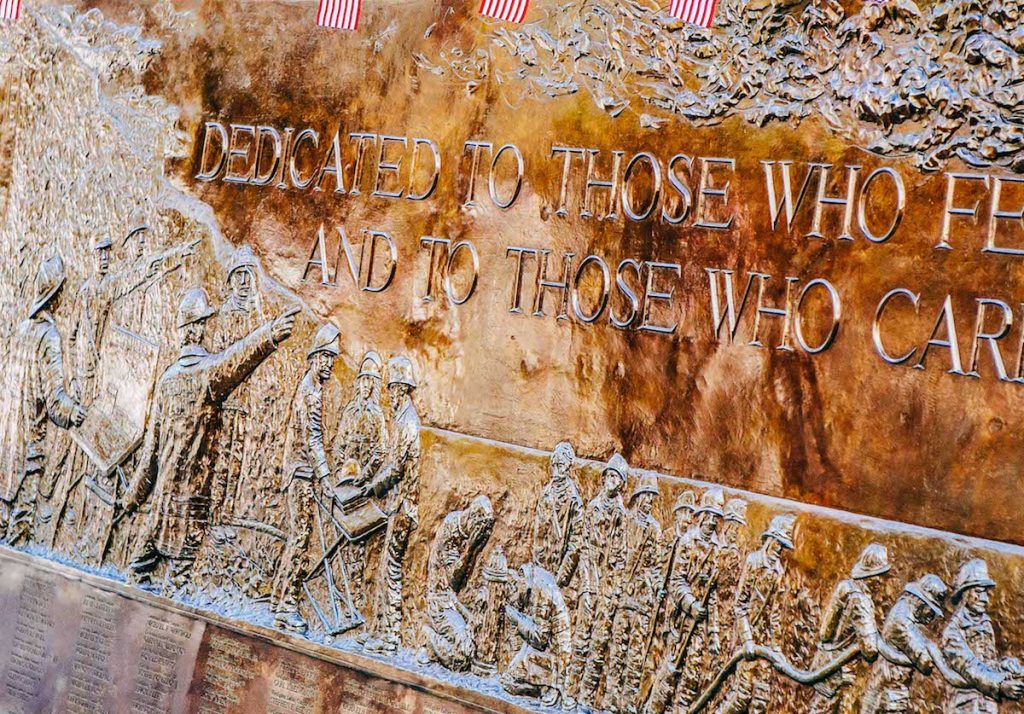 FDNY Memorial Wall is a bronze bas-relief sculpture installed on the wall of the FDNY Firehouse 10, just across the street from the southeast corner of the Memorial Plaza.

What makes it inspirational: The wall commemorates the brave New York City firefighters who responded to the call for help on September 11, 2001, 343 of whom died that day. Many were off duty at the time but volunteered to help. It’s a true example of heroism and courage in the face of tragedy.

Firehouse 10  was badly damaged on 9/11 and had to be rebuilt, but it’s still an operating firehouse today. Because of its proximity, firefighters from the “Ten House” were the first to enter the Twin Towers.

The memorial wall is 56-feet long and depicts scenes of firefighters during the World Trade Center attack. Names and photographs of the heroes lost on that day can also be found in the vicinity. 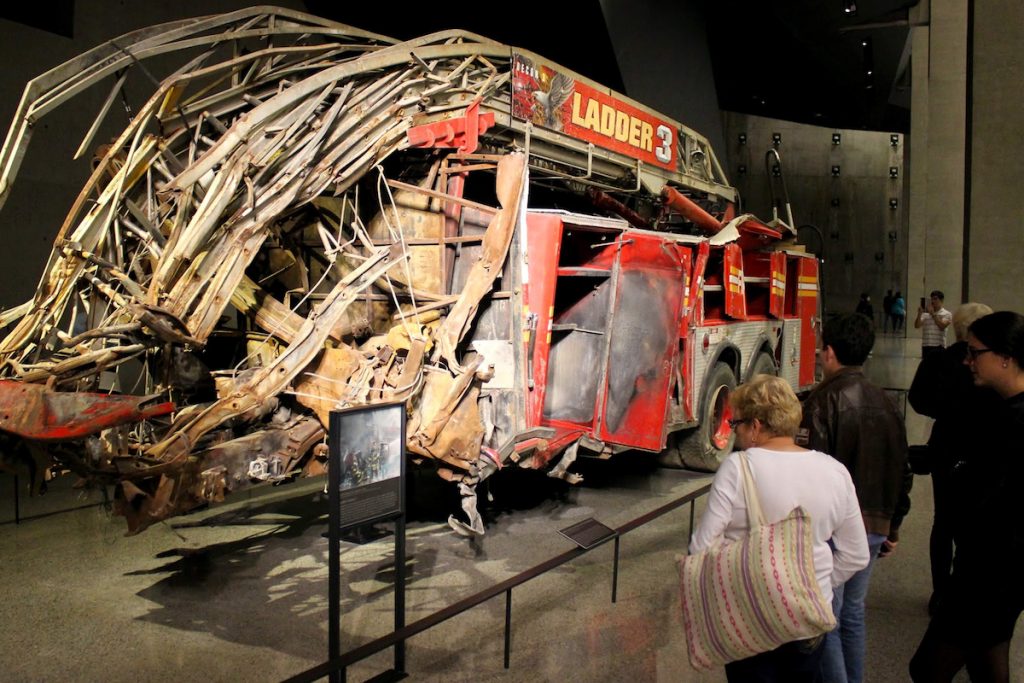 The New York City Fire Department (FDNY) Ladder 3 company was also one of the first responders at the scene. The attack happened during their shift change, so firefighters on both shifts joined the rescue effort.

A dozen of the company’s firefighters entered the North Tower, near where their truck was parked, to help evacuate citizens. The truck was damaged beyond repair when the tower collapsed, and the firefighters inside the building were lost.

What makes it inspirational: The wreckage of the truck, now displayed at the 9/11 Museum, has become a symbol of the courage of New York City’s first responders during the tragedy.

The museum also houses a destroyed FDNY Engine 21 truck and an FDNY ambulance.

Sights to Explore at Ground Zero 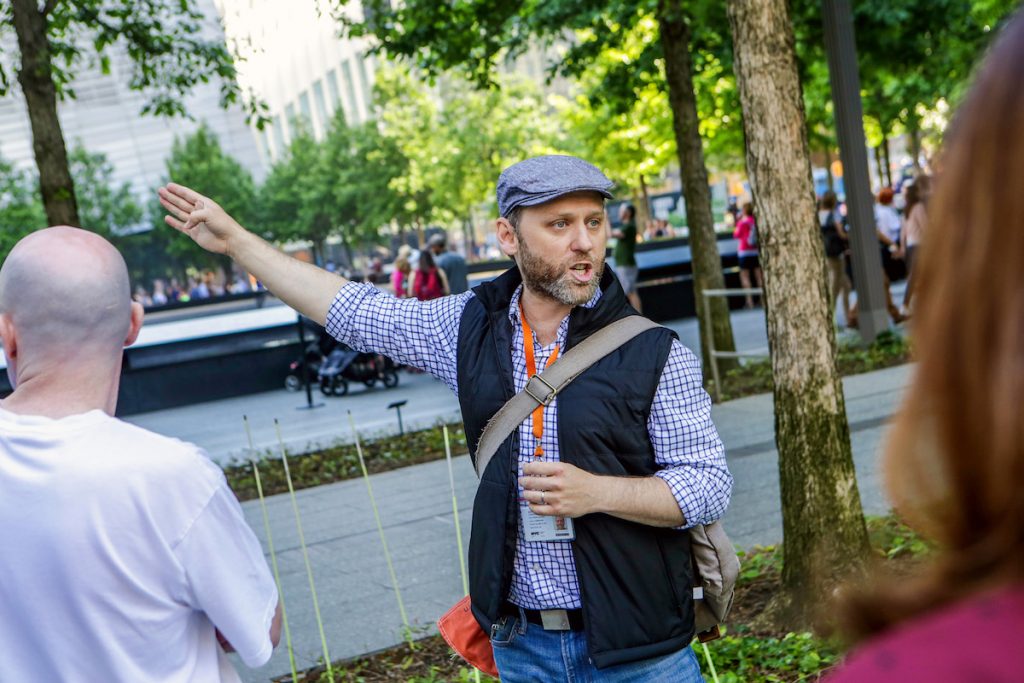 These are a few of the things to see when you visit the 9/11 Memorial and Museum, and they’re just a fraction of what you can explore at Ground Zero. We also recommend visiting St. Paul’s Chapel, a recovery site after 9/11, and the 1,776-foot One World Trade Center, which rose from the ashes to replace the former World Trade Center.

We’d love to walk you through the history and stories of these places on one of our guided tours of Ground Zero. There’s nothing like visiting Ground Zero with a New Yorker who has a personal connection to 9/11 to truly understand what happened here and how it affected the city. 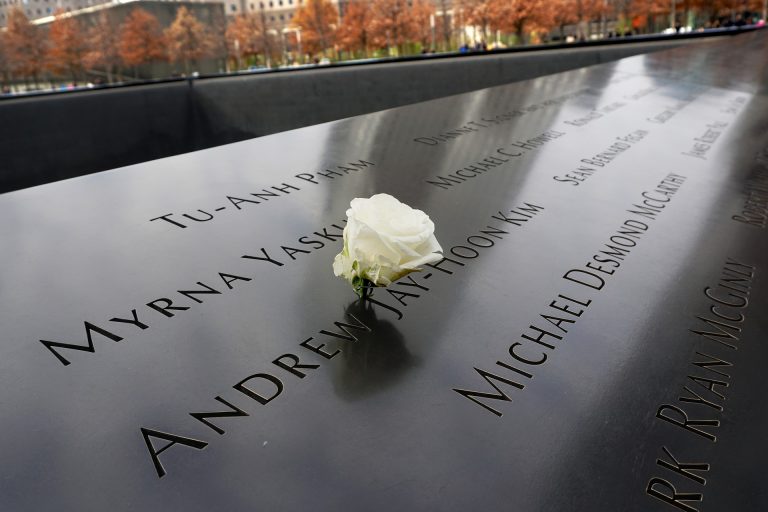 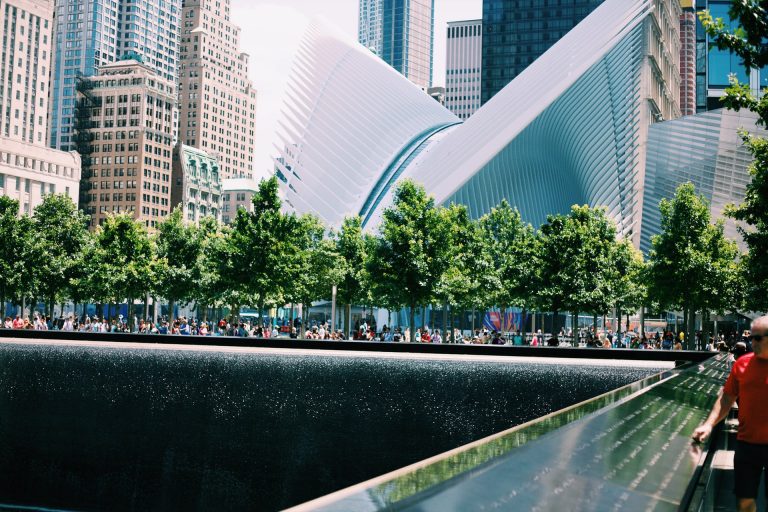